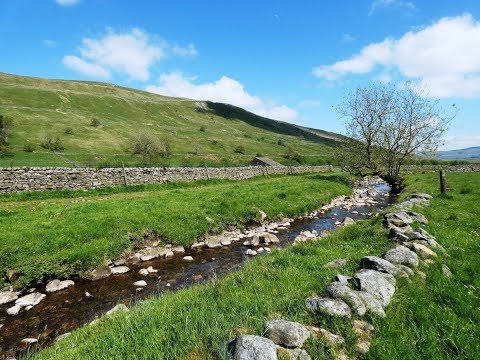 North Yorkshire is England’s largest county and one of the most rural comprising of the Yorkshire Dales, North York Moors, Vale of York and the coastal regions and they all have their own distinctive natural beauty. The county covers an area of 3,341 square miles and 40% of this area is covered by National Parks and with stunning moorland, beautiful dramatic to rolling hills, ancient woodland, a spectacular coastline, splendid waterfalls, many attractive villages and hamlets and many historic sites such as abbeys, castles, priories, stately homes and traditional pubs there is something for everyone of all ages to explore.

Upper Wensleydale lies within the Yorkshire Dales National Park and the River Ure runs through the valley. The River Ure flows for 74 miles from its source at Ure Head on Abbotside Common in the Pennines into the River Ouse at Cuddy Shaw Reach near Linton-on-Ouse, North Yorkshire and Wensleydale is the only dale named after a village called Wensley rather than its river. Wensleydale is perfect walking country with many way marked footpaths and open landscapes giving spectacular scenery all year round. Wensleydale is also renowned for hill farming, rearing many types of Sheep and cattle and the meadow grass for hay and silage is vital to the system. Its industrial past was water powered mills at Gayle, Hawes, Bainbridge, Askrigg, Thoralby, West Burton and Aysgarth which were variously used to grind corn, produce textiles (wool, cotton, linen, silk and flax), generate electricity or saw wood.

Hawes is a picturesque small market town, with the River Ure running though its centre. Situated at the head of Wensleydale Hawes is England’s highest market town and along with the dale it is one of the biggest honey-pot tourist attractions of the Yorkshire Dales National Park. Market day is Tuesday attracting many visitors and gives the locals the chance to get together at the auction mart and stock up with provisions at the indoor and outdoor markets. The town has other attractions such as the Dales Countryside Museum and National Park Centre located in the former railway station, a rope makers where you can see how church bell ropes, halters, skipping ropes and washing lines are made using traditional methods to produce a wide variety of rope products and the Wensleydale Creamery where you can see how the famous Wensleydale cheese is made by hand, to a time-honoured recipe, using milk from local farms where the cows graze the sweet limestone meadows that are rich in wild flowers, herbs and grasses. It is this herbage that gives the milk, and hence the cheese, its special flavour.  The cheese has been made in Wensleydale since 1150 when Cistercian monks settled in the dale and established a monastery at Fors just 4 miles away from Hawes. There is also a Pottery and nearby is a children’s playground. Hawes is also a great place for walkers and hikers with many footpaths to choose from including the Pennine Way which is the UK’s first National Trail. Hawes is nestled between the hills of Great Shunner Fell and Lovely Seat to the North and Wether Fell and Dodd Fell to the south.

Appersett is a hamlet in the Richmond district of the Yorkshire Dales about a mile west of Hawes. The hamlet lies on the A684 road and only has 23 dwellings. Appersett sits at the northern end of Widdale, a small side dale on the south side of Wensleydale, where Widdale Beck has its confluence with the River Ure. The River Ure is a typical clean river of the Yorkshire Dales National Park and is rich in wildlife, insect life and many species of birds. Fishermen love this river for its brown trout, grayling and it also has the nationally rare native white-clawed crayfish.

Cotterdale is a very picturesque small side dale and hamlet on the north side of Wensleydale. The last building at the end of the road through Cotterdale called Shepherds Cottage was built in 1616. The dale is drained by East Gill and West Gill which between them have nine waterfalls. They join to form Cotterdale Beck, which flows over three more waterfalls, including Cotter Force, below which the beck joins the River Ure.

We cross over the bridge then take the small gate on the left just past the farm then turn right and follow the wall towards the second bridge and the river. At the river we turn left over the stile into the wood heading forward with the river on our right. We soon come to the end of the wood and head forward over the field to cross a stile then head slightly uphill to a laid down tree and go through a gap in the wall into another wood. When we come out into the open we cross over the ladder stile and bear slightly right across the field to enter some more trees. We follow the path to cross over a footbridge then turn left across the field to go through the wall to the right of the barn. In the next field we head to the right hand corner to the signpost and turn left onto the track. At the farm we go through the large metal gate and keep following the track along the valley. The track bears left to a gate and at the signpost just before the gate we turn right and head forward keeping close to the left side of the field, the ground can be quite boggy here. At the end of the field we go through a gate and keep heading forward, close to the river on our right, through two more gates then past a ford over the river until we come to some buildings at Mossdale Head. We walk between the buildings to the track, we can see the railway arch, and turn right over the bridge. The track bears right but we head forward uphill through two gates then at the third gate we turn right and with the wall on our right we head forward on a narrow path which soon heads downhill to the main road. We cross straight over the road and the bridge then take the footpath opposite steeply uphill into the trees. At the top we go over a stile into the field and keep heading steeply uphill bearing slightly right to the last tree on the left where we go over a ladder stile. We continue following the narrow path slightly right to go through a gate in the wall. We now head downhill to cross over a ladder stile and continue downhill to cross the minor road then head down to Cotterdale Beck. At the beck we turn left and follow the beck towards the village of Cotterdale. We go through a gate and turn right along the road through the village to the end to view Shepherds Cottage built in 1616. We now turn round and walk back through the village to a picnic table and turn left over the footbridge. We head straight forward through the fields following the path soon to cross the wall on our left. We continue in the same direction through the fields crossing the stiles or through the gateways until we come to a track, The Pennine Way. We turn right then at the t-junction we turn right go through a gate or over the ladder stile then head forward for a short way then take the footpath on the right. We head downhill through the fields to the road then turn left over the bridge making our way back to the car.

This is an easy to moderate walk on tarmac road, on paths and tracks through grass fields and woodland. There are some steep inclines and declines, stiles and gates.

Start point: Appersett in parking area near the bridge over Widdale beck.

Appersett and Cotterdale are in Upper Wensleydale near Hawes in the Yorkshire Dales.

From the A1 take the A684 to Bedale, Leyburn and into Hawes. At the end of Hawes keep following the road round to the right on the A684 to Appersett. Car parking area is on the right just before the bridge.

Parking: free road side parking at Appersett by the bridge.