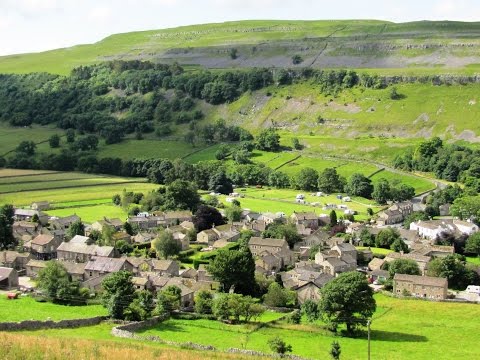 Wharfedale is a beautiful lush green valley in the Dales of North Yorkshire evolving near the village of Cray in Upper Wharfedale where the meandering River Wharfe and the rocky limestone outcrops, give this dale a different type of attractiveness to other dales valleys. Wharfe is a celtic name meaning “twisting, winding”. The river source is the confluence of Oughtershaw Beck and Green Field Beck near Beckermonds in Langstrothdale. The river heads east for its first 15 miles and then flows south and south eastwards for a further 45 miles before it enters the River Ouse at Wharfe’s Mouth near Cawood. The valley from Upper Wharfedale to Lower Wharfedale takes in some of the most prettiest and popular Dales villages before opening out into the Vale of York beyond Wetherby.

Kettlewell is a lively village situated below Great Whernside and Buckden Pike and beside the River Wharfe in Upper Wharfedale and is said to be Anglo Saxon. The village became a thriving community after a market was established in the 13th century, textiles was the main industry and in the late 18th and early 19th centuries lead mining had a big influence on the village and today some of the houses and the vicarage date back to the latter period but the Church of St. Mary is late Victorian. The remains of the smelting mill can be seen near the meeting of the Rivers Cam and Dowber Becks about half a mile above the village. Kettlewell is very popular with tourists and walkers, who can easily access Great Whernside and Buckden Pike via Top Mere Road, and the village houses three pubs, cafe, post office, village store, caravan and camp site, youth hostel and many guest houses and holiday cottages. For years Kettlewell and Top Mere Road was the scene in the opening credits of Emmerdale.

Starbotton is an attractive hamlet and like Kettlewell it is situated beside the River Wharfe below Great Whernside and Buckden Pike both of which can be easily reached via Cam Road which is a green road and has been closed to motor vehicles and trail bikes by the Yorkshire Dales National Park Authority due to the damage that they were causing. The hamlet has around 70 houses, the majority of them are used as holiday accommodation, a pub the Fox and Hounds and only two remaining farms one at either end of the village. Starbotton also has a Quaker burial ground which was restored as a Millennium Project. This area of Wharfedale has been inhabited since the Iron Age and is criss-crossed with pack horse trails from the time when the great monasteries such as Jervaulx, Rievaulx and Fountains Abbey traded wool and other goods across this part of the Pennines. The Dales Way which passes by kettlewell and Starbotton on the opposite side of the River Wharfe is an 84 mile long distance footpath from Ilkley in West Yorkshire to Bowness-on-Windermere in Cumbria. The Smelt Flue that leads up from the back of the village to the Smelt Chimney above Cam Gill is a remnant of the Smelt mill and it was the children’s job to crawl through the flue to collect the white lead oxide from the sides of the flue and that is why there are so many young people buried in the churchyard at Kettlewell, because there was no church in Starbotton, during the 18th and 19th centuries.

We park in the little car park next to the camp site and pay the £2 fee at the garage. We walk through the village past the public toilets on the left and go over the bridge turning immediately right past the phone box and following the little beck on our right. At the cross roads we walk straight over and follow the road bearing left at the sharp bend sign posted Leyburn Gradient 1 in 4. We walk steeply uphill and when the road bends round to the right we head straight forwards on the track (Top Mere Road) sign posted Starbotton 3½ miles. We continue steeply uphill on the track passing through a gate with a bench on the right the track now levels out and we can see the way ahead between two walls. We eventually pass through another gate into open pasture land and head forwards to a wall and keeping to the left of the wall we keep following the path going through a third gate. We head forwards on open ground the path bearing to the right until we come to a sign post and we turn left for Starbotton. We continue on the track bearing slightly right and gradually downhill. The track bends left and we continue downhill following the track to the right and then left taking us steeply downhill towards Starbotton. When we reach the road we head towards the telephone box and the main road where we turn left. We walk to the end of the village and take the narrow footpath on the right taking us down to a bridge over the River Wharfe. We cross the bridge and turn left. We now follow the river on our left on the Dales Way until we come to the road and bridge where we turn left into Kettlewell.

This is a moderate walk on good tracks with a long incline from Kettlewell to Cam Head and a long decline into Starbotton. The river part of the walk is flat and mainly grassy tracks.

Kettlewell is in Wharfedale in the Yorkshire Dales.

From the A1 take the A684 through Leyburn and before reaching Aysgarth take B6160 for Grassington and follow the road through Cray and Buckden to Kettlewell OR from the A1 take the A61 to Ripon then take the B6265 through Pateley Bridge and Grassington then turn right onto the B6160 to Kettlewell. There are two car parks in Kettlewell a pay and display and a small one on the other side of the road next to the camp site where a £2 fee is payable at the garage.

There are public toilets in Kettlewell and the next ones are at nearby Buckden and also at Grassington. For refreshments in Kettlewell there are a few shops, tea rooms and three pubs the Racehorses, the Blue Bell Inn and the Kings Head. In Starbotton there is only one pub the Fox and Hounds. There is another pub at Buckden, the Buck Inn, and at Grassington there are a few pubs and shops.