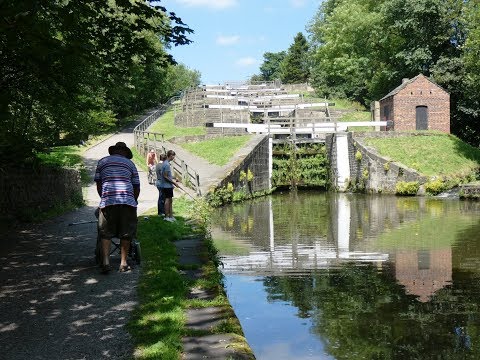 West Yorkshire is a metropolitan county within the Yorkshire and the Humber region of England and came into existence as a metropolitan county in 1974 after the passage of the Local Government Act 1972. The county is landlocked and consists of five boroughs the City of Bradford, Calderdale, Kirklees, City of Leeds and City of Wakefield and shares borders with the counties of Derbyshire to the south, Greater Manchester to the south-west, Lancashire to the north-west, South Yorkshire to the south-east and North Yorkshire to the north and east. West Yorkshire has the most built up and biggest urban area within the historic county boundaries of Yorkshire and lies almost entirely on rocks of carboniferous age which form the southern Pennine fringes in the west and the Yorkshire coalfield further eastwards. In the very east of the county there are younger deposits of magnesian limestone. The Bradford and Calderdale areas are dominated by the eastern slopes of the Pennines producing many steep-sided valleys with a network of roads, canals and railways. This large scale industry and urban area creates views of a wonderful mixture of open countryside, settlements and surrounding hills.  The Yorkshire coalfield is a rolling landscape of hills, escarpments and broad valleys with many converted or derelict mine buildings and recently landscaped former spoil heaps. The magnesian limestone belt to the east of Leeds and Wakefield is an elevated ridge with smooth rolling scenery and dry valleys dotted with many country houses and estates with parkland, estate woodlands, plantations and game coverts.

Bingley is a market town situated on the River Aire and the Leeds Liverpool Canal in West Yorkshire north-west of the City of Bradford. Along with the river and canal the railway line and the main A650 road pass through the centre of Bingley. Bingley was one of the many towns that prospered during the Industrial Revolution. The towns section of the Leeds Liverpool Canal was completed in 1774 linking the town with Skipton and Bradford via the Bradford Canal. The canal leaves the town ascending the side of the valley via the Three Rise and the Five Rise Locks. Several mills were built along the canal and many people moved from the surrounding countryside also many from Ireland in the wake of the Irish Potato Famine to work in them. A railway and a lines goods yard were constructed bringing further trade to Bingley. The Bingley Building Society was founded in Bingley during this period of prosperity.

The Leeds Liverpool Canal runs for a distance of over 127 miles, crossing the Pennines, linking the two cities. The canal is the longest single canal in England with 93 locks on the main line enabling the canal to climb more than 400 feet up the Pennines and down the other side. The Leeds Liverpool Canal has 14 sets of staircase locks along its length. Between Bingley and Leeds there are three sets of two rise locks, four sets of three rise locks and the famous Bingley Five Rise Locks. It has several small branches and in the early 21st century a new link was constructed into the Liverpool docks system. Construction began in November 1770, it took four years to complete the first phase, and the canal was fully completed in 1816 then extended in 1822. It was designed to carry the short boats which could carry a cargo of 45 tons twice as much as the standard narrowboat. Locks were grouped together in staircases so that the boats had long free runs. James Brindley was appointed chief engineer and John Longbotham clerk of works but following the death of Brindley in 1772 Longbotham carried out both roles. The most important cargo was always coal with over a million tons per year being delivered to Liverpool in the 1860’s. Once the canal was fully open receipts for carrying merchandise nearly matched those of coal and with heavy industry along its route and the decision to build the canal with broad locks ensured the canal could compete successfully with the railways throughout the 19th century and remained open through the 20th century.

Five Rise Locks, situated about ½ mile north of Bingley Station is a staircase of locks and is the most spectacular feature of the Leeds Liverpool Canal. This unique 5-rise staircase has a total rise of 60 feet over a distance of 320 feet and is a Grade 1 listed structure. Only a few hundred yards downstream from Five Rise Locks is another staircase the Three Rise Locks with a fall of 30 feet. The locks are supervised by a lock keeper and are closed at night. The Bingley Five Rise and Three Rise Locks opened in 1774. They are the steepest staircase locks on the longest canal in the country and are one of our Seven Wonders of the waterways. At the top of the five flights there is a cafe and a private mooring site for boats with wonderful views of the Aire Valley. These two staircases of locks are a tourist attraction providing a very popular spot for walking, cycling, running and fishing. The narrowboats and boats which pass through the many locks on the Leeds Liverpool Canal often attract a crowd of gongoozlers.

The Bradford Millennium Way is a 45 mile circular walk taking in much of the idyllic countryside that surrounds the City of Bradford in West Yorkshire. The walk was devised by five volunteers from the Bradford Countryside Service to commemorate the New Millennium and officially opened on Saturday 16th September 2000. The team have now created 16 circular walks taking in sections of the Millennium Way so you can complete the walk over a number of sessions. These walks have been put into a book and can be bought in Bradford’s Tourist Information Centre.

Only the canal towpath is suitable for pushchairs and wheelchair users.

From the bus stop we head downhill by the lawn area between the houses to the little bridge at the bottom. We cross over and head forward until we reach the Leeds Liverpool Canal at Hurst Lock. We now turn right and follow the towpath with the canal on our left. At the bridge we cross over and keep following the towpath now with the canal on our right, passing Dowley Gap Locks and Three Rise Locks, until we reach Five Rise Locks at Bingley. After a visit to the cafe we retrace our steps to Three Rise Locks and turn right to cross the footbridge over the main road and the railway line. At the other side of the bridge we make our way to the traffic lights on the main road and cross straight over, Bingley town centre is on the left, and head forward past the White Horse pub following the road over the bridge. We pass the Brown Cow pub and keep following the road uphill and after a short way we take the footpath on the left into the trees. We continue on the track with the River Aire on our left and when we come out into a field we head forward then when we see a footbridge on the left we turn right into the trees again. We go up the steps then turn left and follow the path. We soon go through a gap in the wall and head forward to the left of a building. We head slightly downhill go through a wall then cross over a stone bridge over Harden Beck. At the tarmac track we bear left onto the Bradford Millennium Way and continue passing the cricket field on our left and the golf course on our right. At the end of the track we head forward to the main road, cross straight over and go through the gap in the wall. We continue on the path with the river on our left and back gardens of houses on our right. We go into a wood and under the main road then soon walk between two walls. We continue following the river under the railway line then bearing left we soon arrive back at the canal. We turn left over the river bridge then drop down round some buildings. When we come to the footbridge over the canal we cross over and turn right then very soon we take the footpath on the left down some steps next to a wooden fence rail. We now just follow the path, still on the Bradford Millennium Way, with the River Aire on our right. Immediately after passing the rowing club on our left we bear left uphill to the track at the top then turn right back to where we parked the car.

This is an easy family walk following the Leeds Liverpool Canal and the River Aire on gravel, tarmac and grass tracks/paths and bridleways. There are some stiles and steps and some minor inclines and declines through the wooded areas.

Bingley is north-west of Bradford in West Yorkshire.

From Shipley take the A6038 towards Baildon. After crossing the Canal and then the River Aire take the road, Coach Road, on the left just before the church. At the right hand bend bear off left onto Higher Coach Road and continue past the school to the end of the road.

Parking: Free parking at the side of the road.

There is a men’s and ladies toilet in the cafe at Five Rise Locks and there are three pubs en-route the Fishermans Inn, Old White Horse Inn and the Brown Cow. In Bingley town centre there are several pubs and eating places along with plenty of shops.