The Village – Hayfield to Lantern Pike round 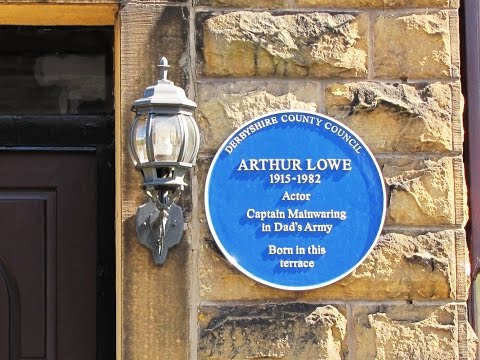 Hayfield is the setting for the Sunday night television series “The Village” this is the first of four videos that we have filmed in the area.
The Peak District is made up of two areas The White Peak which is a limestone plateau of green fields with rolling hills and many dales and The Dark Peak (or High Peak) which is a series of higher, wilder and boggier grit stone moorlands. The Peak District is also known as the Derbyshire Peak District and also covers areas of Greater Manchester, Staffordshire, Cheshire, West Yorkshire and South Yorkshire. Although there are no prominent boundaries the central and most rural area of the Peaks lie within the Peak District National Park. The Peak District National Park Authority provides public facilities such as car parks, public toilets, visitor centres and also maintains the rural nature of the park although most of the land is still owned by the traditional landlords.

Hayfield is a lovely village situated below on the west side of Kinder Scout in the Sett Valley between the towns of Glossop to the north, Chapel-en-le-Frith to the south and New Mills to the east. The village was once a staging post on the pack-horse route across the Pennines from Cheshire to Yorkshire the route went up the set valley and over the watershed at Edale Cross, where the old stump of a cross still stands, and descended Jacobs Ladder into Edale. The village is now split into two by the A624 relief road which was built to ease heavy traffic that once ran through the narrow main streets. The west side of Hayfield grew with the arrival of cotton in the 19th century followed by the railway and has now extended down the Sett Valley merging with Birch Vale and New Mills. Even though some stone quarrying still takes place in the area around Hayfield the remains of old quarries and millstone manufacturing can still be seen. Other industries in the village were clog making, charcoal burning and domestic implement manufacture. There were also several cotton mills within the village along with many fabric printing and dyeing businesses as well as paper manufacture and Hayfield became known for spinning, weaving and calico printing. The railway branch line linking Hayfield to Manchester was built in 1868 firstly to carry fuel to power the mills but closed in 1970 as part of the Beeching cuts. The railway also brought many visitors to Hayfield and the car park, now the bus station and information centre, was the railway station. The dismantled railway trackbed leading from the back of the car park is now the Sett Valley Trail which follows the River Sett to New Mills. Along the 2½ mile trail there are plenty of benches, a reservoir and wonderful views of the surrounding hills. Hayfield to the east of the relief road is the olde-worlde part of the village with some wonderful old terraced houses, cottages, farms, shops and pubs. The River Sett that flows through Hayfield and Birch Vale rises near Edale Cross on Kinder Scout and joins the River Goyt at New Mills. Kinder Road the no through road that goes off round the back of the Royal Hotel leads to Kinder Reservoir and Kinder Downfall on the west side of Kinder Scout. The road passes a pub the Sportsman and Bowden Bridge quarry the starting point of the famous Mass Trespass over Kinder Scout in 1932 which is now a car park with public toilets and picnic tables. Opposite the car park there is a camp site. The Snake Path also leads off Kinder Road along William Clough to the Snake Inn. There are two churches in Hayfield and the Church of St. Matthew was relocated from Kirksteads in 1386 and was not completed till 1405. The tower was built in 1793 and raised in 1894 adding a clock. St. John’s Methodist Church dating back to 1782 claims to be the 13th Methodist church built. The four walls of the main church are original even though it has been added to. Methodism was prominent in the area which led to several other chapels being built. Arthur Lowe the actor who played Captain Mainwaring in “Dads Army” was born in a terraced house in Kinder Road and there’s a plaque on the wall where he lived. He helped to raise the money to buy the cricket club next to the Royal Hotel in 1976 by bringing along a team of cast members of Dads Army, including Bill Pertwee, Ian Lavender and Arthur Ridley (Private Godfrey) to take on the Hayfield team captained by Ron Heron. Dads Army lost the match by 25 runs but the event raised several thousand pounds. Arthur was well associated with the cricket club through his father Arthur Lowe senior who was chairman for 22 years until his retirement in 1968. The Arthur Lowe Memorial Cup is still presented to the winners of the League Junior Under 17s. Hayfield lies on the Pennine Bridleway and is a traditional starting point for the ascent to Kinder Scout and Lantern Pike making the village popular with walkers, mountain bike riders and fell runners.

Little Hayfield is a hamlet about a mile from Hayfield travelling north on the A624 towards Glossop. Sheep dog trials and fell racing are held here and is home to the Lantern Pike Inn. Behind the pub is the public footpath leading to the Pennine Bridleway and Lantern Pike from which the pub takes its name. Clough Mill at the back of the pub was a water powered and later steam powered textile mill and was converted to apartments and flats in 1989. Lantern Pike at 373 metres, possibly used as a beacon, lies within the Peak District National Park and is owned and maintained by the National Trust. The Pennine Bridleway is a 200 mile National Trail connecting the Peak District, South Pennines, Yorkshire Dales and Cumbria and is fully signposted following a mixture of old packhorse trails, drovers roads and newly created bridleway sections travelling through stunning scenery. The new 52 mile Yorkshire Dales National Park section of the Pennine Bridleway was planned and designed specifically for horse riders, mountain bikers and walkers. The new section which opened in June 2012 stretches from Long Preston to the Fat Lamb Inn near Ravenstonedale.

From the car park we cross the A624 heading towards the church. Just before the church we turn left along Walk Mill Road then turn left to take a look at the waterfall from the little garden opposite the village hall. From the garden we turn left and go down the alley way on the right of the church. We come out at the road and turn left over the bridge and left again in front of the chemist. We walk past the post office and turn right at the Pack Horse pub and follow Kinder Road past Hankins shop, Rosie’s Cafe and a plaque on the wall of a terraced house in memory of the actor Arthur Lowe in “Dads Army”. We keep following the road and as it levels out take the footpath on the left signposted Snake Path. We follow the track uphill then through the fields and gates, passing to the right of the twenty trees, until we reach a gate with a National Trust sign. We go through the gate and turn immediately left and follow the wall on our left which leads downhill to a track. We turn right following the track bearing round to the right until we reach a National Trust Middle Moor sign. We go through the gate on the left and immediately left and follow the track until we meet the main road. We cross straight over the road into Slack Lane and head downhill to Clough Mill. At the end of the building we turn right over two footbridges and turn right slightly uphill to cross over a stile. We follow the stone slab path then turn left along the small hedge line and then slightly right to a stile in the corner of the field between a white house on the right and some houses on the left. We cross the stile and the stile opposite and head uphill. At the end of the trees on our right we go over a stile and keep heading uphill slightly to the right until we arrive at the top. We bear left to take the track, the Pennine Bridleway, between two walls at a gate. At the bend we bear off right at the signpost for Lantern Pike. At the top of Lantern Pike we admire the views before heading forwards along the top following the path. We drop down to a wall and turn left still going downhill until we meet the Pennine Bridleway again. We turn right through the gate and follow the track to a small road we turn right and immediately left at the signpost Hayfield 1½ still on the bridleway we head downhill and when the track bears round to the left we head straight forwards through the gate. We make our way to the road and the Sett Valley turn left over a bridge and past a cafe on the right then take the footpath on the left through a gate signposted Pennine Bridleway Hayfield 1. We now follow the bridleway and Set Valley Trail which is a dismantled railway line back to Hayfield car park.

Hayfield near New Mills is located between Glossop and Chapel-en-le-Frith in the Peak District of Derbyshire.

Travelling from the north turn off the M1 at junction 37 and take the A628 towards Manchester. After passing the first reservoir take the next left the B6105 to Glossop then take the A624 to Hayfield. To reach the car park turn right at the road for New Mills and immediately right at the Kinder Lodge pub.

Travelling from the south turn off the M1 at junction 29 and take the A617 to Chesterfield then the A619 to Baslow and the A623 to Chapel-en-le-Frith then take the A624 to Hayfield. To reach the car park turn left at the road for New Mills and immediately right at the Kinder Lodge pub.

There are public toilets in Hayfield car park, in Bowden Bridge car park and at New Mills. For refreshments in Hayfield there is Rosie’s cafe, two shops and four pubs The Kinder Lodge, The George, The Royal and The Pack Horse. There are also more pubs and shops towards Birch Vale and at New Mills. There is also the Lantern Pike at Little Hayfield.