Cotswolds – Old Sodbury to Horton and Hawkesbury Upton round 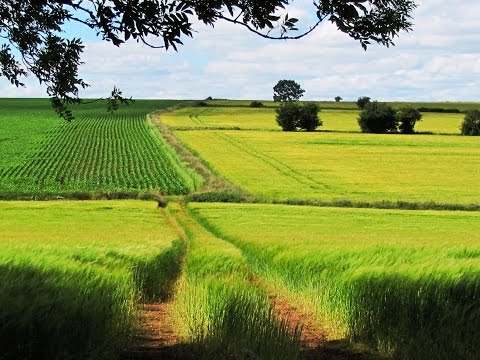 Old Sodbury in South Gloucestershire is a small village in the valley of the River Frome not far from to Chipping Sodbury and Yate to the west. The village lies on an old coaching route and is more ancient than Chipping Sodbury.  It also lies on the Cotswold Way. The 11th century St John the Baptist Church was built between 1200 and 1225 at the north end of Old Sodbury on the hill with magnificent views over the Vale of Sodbury. Although the church has been enlarged and altered much of the original Norman work remains. In the nave there is an arcade of Norman columns, there are two Norman windows and the tower is also Norman. In the churchyard some of the grave stones date back to the early 19th century and there are a number of old bale-tombs of rich merchants. This lovely church is open every day for anyone to visit. The Iron Age hill fort just to the north east of the village sits on the edge of the Cotswold escarpment and is enclosed on three sides by two parallel earthworks. It is open to the west providing impressive views of the Frome Valley, Severn Vale, and the Welsh mountains. The Romans strengthened the fort for use as a camp to support their western frontier and in AD 577 the Saxon army also used the fort as a camp before the battle of Dyrham. Little Sodbury also has an Iron Age hill fort which was reshaped by the Romans.

At Little Sodbury, a small village located about a mile above Old Sodbury, there is Little Sodbury Manor originally 15th century and the home of Sir John Walsh. The manor retains the porch and Great Hall with a timber roof resting on corbels carved as shield-bearing angels, of the 15th century courtyard house. The house fell into disrepair in the 19th century and was restored by architect Sir Harold Brakspear. The village is also home to St Adeline’s Church built in 1859 by William James.

Horton is a small village about 2½ miles above Old Sodbury and is a linear village built on the bank of a steep hill. In the village is Horton Court a stone built manor house which is now owned by the National Trust and the Little Avon River rises near Horton Farm.

Hawkesbury Upton is a larger village about 5 miles from Old Sodbury and also lies on the Cotswold Way. The village holds the character of a typical Cotswold village, including the use of the local limestone in most of the buildings. Nearby on the Cotswold Edge is the Somerset Monument which was designed by Vulliamy and built in 1846 as a memorial to Lord Robert Somerset of Badminton, an army general who fought at Waterloo. Hawkesbury Horticultural Show has been held in the village on the last Saturday in August for over 130 years and is also home to world-renowned football club, the Hawkesbury Stallions.

The Cotswold Way is a 102 mile long national trail that runs from the market town of Chipping Campden in the north to the World Heritage City of Bath in the south. The route runs for most of its length on the Cotswold escarpment which is a ridge through the Cotswolds Area of Outstanding Natural Beauty. Along with its stunning views it passes through many picturesque villages and close to a number of historic sites. In 1998 the trail, after much lobbying, was approved by the government for its development as a National Trail. It is a very special designation and was formally launched as a National Trail in May 2007. The trail is said to be the best marked trail in England. In some locations the Cotswold Way is being diverted from its old route along new and improved paths. Where this occurs the old path will remain open but will no longer be signed as the Cotswold Way. The Cotswold Way has been twinned with a scenic coastal walk in South Korea to become one of the World’s first ‘friendship trails’.

This is an easy walk through grass fields, on gravel paths and tracks.  Some minor tarmac roads and one climb after Horton Court.

Old Sodbury is east of Chipping Sodbury in the Cotswolds, Gloucestershire.

Old Sodbury is situated on the A432, just off the A46, about a mile east of Chipping Sodbury. The church and parking is about 0.25 miles north of the village.

There are no public toilets the nearest ones are at Chipping Sodbury. For refreshments there is the Dog Inn in Old Sodbury village.  In Hawkesbury Upton there is the Beaufort Arms and the Fox Inn both are on the High Street, a shop and a post office. There are also shops, pubs and restaurants in nearby Chipping Sodbury and Yate.